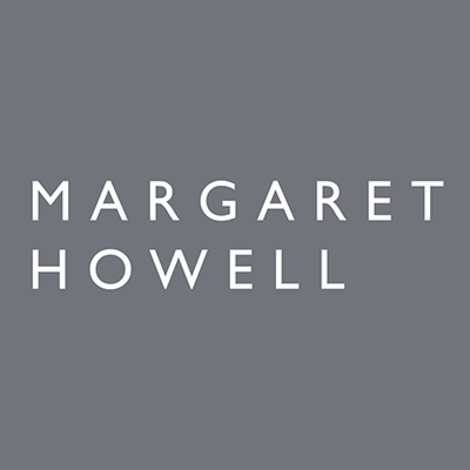 After graduating from a fine art degree at Goldsmiths’ College, London in 1969, Howell started making accessories. Her hand-made beads and knitted accessories came to the attention of Vogue and other fashion magazines, encouraging her to go onto designing clothes.
Margaret found inspiration in the fine make and fabric of a man’s shirt, she used quality shirting usually issued for formal wear, but making it up into a softer, less traditional shirt. Howell started her business from a modest flat in Blackheath, South East London. It was an immediate, if somewhat unexpected, success. As the business expanded, Howell added a workshop, located on the Old Dover Road in Blackheath.
Early customers were Paul Smith, Ralph Lauren, Browns and Joseph Ettedgui. This led to Ettedgui entering into a partnership with Howell, funding the first dedicated men’s shop in South Molton Street, London in 1976.
The number of women who bought from the shop prompted the introduction of designs for both men and women. The first independently owned Margaret Howell shop opened in St Christopher’s Place, London in 1980 after the franchise with Ettedgui came to an end. The early 1980s were a period of expansion for the label, with a license signed with Washo, Tokyo to manufacture and sell Margaret Howell designs in Japan.
In 2002 the company moved its London offices and prime shop to Wigmore Street, designed collaboratively with architect William Russell. The retail space sells men’s and women’s clothing collections, accessories, books and furniture. Howell uses the Wigmore Street shop to stage exhibitions that draw attention to aspects of British design. They have included displays of Anglepoise lamps, Robert Welch cutlery, and Ernest Race furniture. This has extended to include architecture including Span Housing. Howell is a committed supporter of Open House – the charity that promotes access to notable buildings throughout the UK – and in association with them and the RIBA.
In 2007 Howell was made a Royal Designer for Industry by the Royal Society of Art and was awarded a CBE for services to the fashion industry. In 2010 she was awarded an Honorary Doctorate from University of the Arts London; in 2013, Howell was awarded an Honorary Professorship from the University for the Creative Arts and in 2015 she was awarded an Honorary Fellowship from Goldsmiths, University of London.
Margaret Howell is now sold worldwide with flagship shops in London, Paris, Florence and Tokyo and has more than 100 outlets throughout Japan.